I grew up a child of the 80’s as part of the MTV generation. Much of my teenage years were spent watching music videos, hanging out with friends, and generally trying to avoid responsibility. With a little help from the Retro Futura tour, I was able to relive some of that magic last night.

I should start by saying I’m a big fan of Retro Futura, having attended the 2017 edition headlined by Howard Jones.  When this year’s lineup was announced with Belinda Carlisle, I immediately scooped up tickets.  Now all that was needed was to patiently wait until late July for the 2018 edition to arrive at the OC Fair’s Pacific Amphitheatre.

Finally that day arrived, and we reached our seats just before Annabella Lwin of Bow Wow Wow kicked off the concert promptly at 7pm. Unfortunately for her, most of the crowd had not yet arrived – and those who were in their seats didn’t seem to immediately recognize her. Long gone is the partially shaved punk rock haircut of her youth – replaced instead with a bowler hat. Her set was brief, but featured several of the bands hits including Aphrodisiac, Do You Wanna Hold Me, and The Man Mountain. She closed with the unmistakable I Want Candy – a song which brought portions of the crowd to their feet and garnered some audience participation with the chorus. And with that, Annabella thanked the crowd and hurried off stage.

And just as quickly as Annabella exited the stage, Limahl from Kajagoogoo was in place and ready to begin his set. I’ll be honest, I wasn’t that familiar with Limahl’s work with the exception of the title track to The Neverending Story and the iconic Too Shy. He did not disappoint – delivering both of those songs and working the crowd as he moved through his set list. At one point he stopped to show the audience a signed photograph from his early 80’s Kajagoogoo days – highlighted by his trademark hair. A lucky fan directly in front of us was given the photograph, and she quickly held it up and took a selfie with Limahl in the background. By this point the amphitheatre was beginning to fill up, and as Limahl closed out his set with Too Shy, the crowd was up on their feet and belting out the chorus – “too shy shy hush hush eye to eye”.

Next up was Tony Lewis of The Outfield who walked on stage with his trademark headless bass – this time a well loved red Status, which appeared to be the same bass he played in the Say It Isn’t So video from 1985. Probably not coincidentally, he began his set with that very song and then continued to work his way through The Outfield’s hits such as All the Love and Since You’ve Been Gone. Next he sprinkled in a track released just this year, Into the Light. I really enjoyed the new song – hearing it for the first time as he performed it live. Tony’s set wrapped up with their top 10 hit Your Love – a song which had many members of the audience up and dancing in their seats.

At this point, there was a slight break between acts as the stage had to be readied for Modern English who would be performing without the house band (the first three acts shared the same band). So with that, I left my seat and headed towards the box office to locate Belinda Carlisle’s manager Mark Botting as I had a “meet and greet” scheduled for 8:10. I’ve actually never done a meet and greet – and to say I was excited to meet Belinda in person was an understatement. There was a crowd of about 30 people in line around the merchandise table, and at first I assumed that it was the group queuing up to meet Belinda. The line was actually for Limhal – who had been signing merchandise since the end of his set – and still had people showing up to meet him. Glancing around, I spotted a group of people nearby wearing similar “Belinda” orange wristbands – I had found my people.

At about 8:15, we were lead backstage – passing Tony Lewis as he headed up the stairs towards the merchandise area. We stopped in an open area directly behind the main stage where a “Pacific Amphitheatre” backdrop1 was waiting. After some quick instructions (“have your camera ready”, “please don’t take pictures until it is your turn”, “if you want something signed, have it out and ready”) we lined up to meet Belinda. And just like that, she appeared and started chatting and posing with each person. I was about tenth in line, but only waited about 5 minutes before it was my turn. I had Belinda sign a first pressing Belinda LP2 which I had purchased off of eBay. I had several CDs from my collection I thought about bringing instead – but LPs are just so much cooler to display. After some brief conversation (I congratulated her on the opening of Head over Heals on Broadway which was taking place that evening) her manager snapped a few pictures3, and I was done. Not wanting to risk putting my freshly signed LP back in its case until it had fully dried, I hung out back stage and watched the line slowly dwindle. Belinda was friendly and gracious to each person she met – taking the time to engage in conversation while signing an array of memorabilia – albums, photos, books, shirts. All in all, the $100 package was definitely worth it – especially considering 100% of the proceeds go to the Animal People Alliance – a charity which she co-founded.

I headed back to my seat in time to hear Modern English perform Hands Across the Sea. I saw their entire set last year during Retro Futura 2017 and loved every minute of it. For those not familiar, Modern English is comprised of most of the original band members (everyone except for drummer Richard Brown), and it shows in their performance. Their songs were tight, they played off each other well, and they seemed to have a great time doing it. They closed with their hit single Melt with You. Robbie Grey’s vocals were fantastic – so much so if you closed your eyes you could easily imagine yourself back in 1982.

As Modern English left the stage, technicians scurried around to prepare for Belinda Carlisle. Many of the audience assumed she would be going on last, but she is technically co-headlining with ABC, so it seems they take turns closing out the show. After a brief 10 minute break, Belinda came on stage as the crowd jumped to their feet. She immediately began singing Mad About You – a song I recently heard her perform as part of The Go-Go’s run at the Hollywood Bowl. Grabbing her tambourine she danced a mesmerizing pattern across the stage while working her way through hit after hit:

There is always a “song that you wish was played” – and for me that was Summer Rain, an excellent track off of Runaway Horses.  It would have been especially appropriate for Orange County considering the lyric “I remember the rain on our skin, and his kisses hotter than the Santa Ana winds.”

During her performance, Belinda paused between songs to talk to the audience – at one point telling the story of how she initially wanted to play bass for The Go-Go’s, but (thankfully for us) that instrument was already taken (by original bassist Margot Olavarria). Her entire performance was fantastic, and her supporting band did their best to imitate the spunky playing style of The Go-Go’s tracks. Belinda did rely on a background vocal track for many of the Go-Go’s songs – understandable considering that her band, while good, could not possibly match the voices of Jane, Charlotte, Kathy, and Gina. Finishing out her set with Heaven Is a Place on Earth4, Belinda danced off stage to a standing ovation.

As the technicians prepared the stage, quite a few folks from our section headed for the exit. Now I realize it was a school night, but with another band still to perform, we weren’t leaving unless we were dragged out of the amphitheatre. ABC took the stage a short time later, with original lead singer Martin Frye looking as dapper as ever5. During their set, the band covered such fan favorites as King Without a Crown, All of My Heart, When Smokey Sings, and Poison Arrow. They finished off the night with the fantastic single The Look of Love.  With that, the lights turned on and we headed for the door.

We go to a lot of concerts, and I have to say that for the money, you can’t beat the Retro Futura Tour. We spent $60 each for seats in row four dead center – amazing. And as always, Pacific Amphitheatre was a great venue – easy parking, great staff6, and excellent site lines to the stage. We’re already looking forward to Retro Futura 2019. 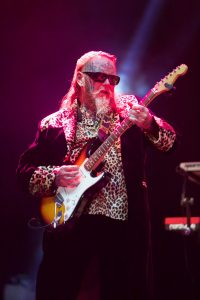 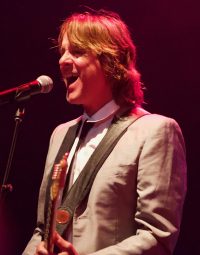 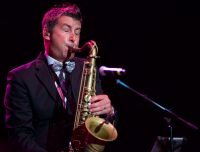 1 In the future *please* move the backdrop away from the red overhead light and to a place with more natural lighting.
2 Here is a photo of the signed LP. 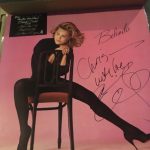 3 Here is a photo of me looking bewildered by the fact that I am actually standing next to Belinda. 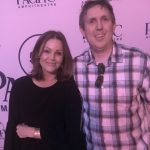 4 One of my all time favorite videos.
5 Martin rocked an amazing paisley jacket similar to the one Paul Young wore last year.
6 Shout out to Linda for her friendliness and help – folks like her make Pacific Amphitheatre such a great location for concerts.