The Go-Go’s at the Hollywood Bowl

The Go-Go’s at the Hollywood Bowl

For the past 15 years since I moved to Orange County, I’ve spent the 4th of July in pretty much the same way:  inviting friends over, eating too much BBQ, and watching fireworks from my deck.  This year…this year was different.  This year I spent the 4th with The Go-Go’s and the Los Angeles Philharmonic.  And sorry old routine, but this was absolutely the best 4th of July on record.

Let’s rewind a bit.  My story is not unlike many of ours.  I grew up a child of the 80’s – a time when you heard of new bands not on the Internet, but rather on your FM dial. A time when you swapped cassette tapes with friends. A time when you knew exactly how long to press the rewind button in order to go back to the beginning of your favorite song. And back then, I’d listen to those favorites over and over:  Back in Black, High and Dry, Women and Children First, Moving Pictures, Business as Usual, Freedom of Choice…the list goes on and on.

One day a classmate of mine lent me her copy of Beauty and the Beat.  By the end of side one, I was hooked.  After a week I reluctantly returned the cassette to it’s rightful owner (hey, she had my Men at Work cassette as collateral!), and with my next few allowances saved up to buy my own copy.  As time went on, I kept up with the band – grabbing their subsequent albums and being mesmerized when I finally saw the Our Lips are Sealed video for the first time.  And then after the band split up, I followed Belinda and Jane through their solo careers (I just recently found my well played Leave a Light On cassette single – ah, memories).

Through all that, never once did I see any of The Go-Go’s in concert.  Partly because going stag to see Belinda Carlisle was a tough sell in high school, and partly because at the same time I was much too shy to ask a girl to a concert.  Luckily, I got another shot when all five original members of The Go-Go’s announced they would be playing a short series with the L.A. Philharmonic.  The Go-Go’s + L.A. Phil + iconic venue + picnic dinner + fireworks = DEFINITE YES.

I bought two tickets in the garden boxes as close to the stage as I could manage.  It briefly crossed my mind “hmmm, you probably can’t see fireworks very well from that close”.  Which was quickly rebutted with “yeah, but you can see fireworks everywhere – this is The Go-Go’s – buy the closest seats you can.”  I love it when I win a debate with myself.  For those keeping track at home:  The Go-Go’s > Fireworks.

As July approached, the customary question of “what are you doing on the 4th?” would come up in casual conversations.  My answer to which was usually something along the lines of “Oh, nothing much – just GOING TO SEE THE GO-GO’S AT THE HOLLYWOOD BOWL!”.  Now most people had one of two responses:  “OMG, that is crazy awesome!  How did you find out about that before the tickets sold out?”  (umm, I know this really cool website…) or “Dude, I love the Hollywood Bowl, but holiday traffic is going to be horrible.  And have you ever parked there?  They STACK park cars – you’ll never get out.”  Fortunately for me, the second concert ticket belonged to my awesome wife – who already filled me in on what appears to be a bit of a well kept secret – you can pay $10 (roundtrip!) and take a shuttle from Long Beach directly to the Bowl.  Heck, you can’t even get an uber to take you around the block for that price.

With that, we prepared for our trip to the concert.  For those not familiar, you can bring food and wine into the Hollywood Bowl for most events.  I know what you’re thinking – “wait, most venues go out of their way to make sure you don’t bring in so much as a drop of water, you’re telling me you brought a full dinner and drinks with you?”.  Yep, that is exactly right.  We packed sandwiches, chips, and some desserts – along with a bottle of wine and two bottles of Cheerwine (pretty much the best soda on earth) – and headed towards Long Beach.  We arrived at the shuttle stop at around 4pm (our departure time wasn’t until 5:15pm – but the shuttle will often leave early if enough people line up).  After a bit of milling about the shopping center, we were on the bus and on our way by 4:45pm.  With some surprisingly light holiday traffic, we were dropped off directly in front of the main gate.  We walked up the hill to the mid gate, where there was nobody in line at security.  After a brief debate with security if I could bring in my tiny point and shoot camera (at first “no”, and then “yes”) we were on our way to our seats.

When we arrived at our four person box, another couple was already enjoying a picnic spread.   When I bought the tickets, I had some initial concerns that we might end up sharing a box with somebody who wasn’t going to be quite as into the show as we were.  After a few minutes of chatting, it was obvious that these were our people – the guy was a huge Belinda fan, and they were equally as excited for the show.  High fives all around.

After enjoying our dinner and some good conversation, the sun began to disappear behind the trees and the Los Angeles Philharmonic took the stage.  Promptly at 7:30pm, Thomas Wilkins, the conductor of the LA Phil walked out to greet the crowd.  After a quick warm-up, the orchestra played the national anthem which echoed through the bowl along with the voices of the crowd singing along.  The anthem was followed by a medley of patriotic songs by George M. Cohan which included The Yankee Doodle Boy and You’re a Grand Old Flag.  At one point, out marched the U.S. Air Force Band of the Golden West, with three of their members standing front and center for a rendition of Bugler’s Holiday.  Between pieces, Thomas Wilkins took the time to relay stories to remind us to be thankful for our freedoms and to be especially thankful to the men and women in the armed forces who make those freedoms possible.  Members of the armed forces and their families were invited to stand up when they heard the anthem of their branch of the military.  This was particularly great to see, a very nice nod of appreciation on Independence Day for those who serve.  After a few more patriotic songs, the philharmonic left the stage to a round of applause.  Next up – The Go-Go’s.

Right at 8:30, The Go-Go’s came on stage to thundering applause.  Belinda immediately kicked off her shoes, and settled on top of a rug placed on stage behind her microphone.  After a quick welcome from Belinda and Jane, the band, accompanied by the Los Angeles Philharmonic,  opened with one of my favorite songs:  This Town.  Wow!  Not only did The Go-Go’s sound amazing, but the orchestra helped take the song to an entirely new level.  This would be the theme throughout the night – as The Go-Go’s ripped through a setlist of one fantastic song after another, half of which had the backing of the orchestra.  Fans were dancing in the aisles and singing along to each song. After over an hour of non-stop music, the band finished with Head Over Heels, not coincidentally the name of their new musical.  And with that, the band walked off stage to a standing ovation.

The U.S. Air Force Band of the Golden West once gain joined the orchestra and the fireworks show began – there is something magical about live music that is synchronized to a fireworks show.  Midway through the performance, conductor Wilkins passed the baton and USAF Captain Rafael Toro-Quiñones led the combined orchestra.  As the fireworks display began to reach the finale, a high school marching band drum line came on stage to pound out a driving beat – a precursor to what was to come next.  As the fireworks ended and the marching band left the stage, The Go-Go’s were in position to bring the crowd to a frenzy with We Got the Beat.  With one final bow from all the performers, the concert was over.

The house lights came on and we slowly filtered out of the Bowl, there were conversations happening all around about what a great show everyone had just witnessed.  As we made our way back to the shuttle, I greedily wanted more – wishing I had attended one of the shows earlier in the week.

Hopefully, the The Go-Go’s will be back on tour soon – this time with Gina Schock.  Unfortunately, Gina wasn’t able to perform as she recently underwent surgery.  Her long time drum tech Chris Arredon stepped in and performed admirably – but it would be great to see all five Go-Go’s on stage at the same time.  Next up for Belinda is the Retro Futura tour which runs through early August.  Rock in the OC will be there on 07/26.  We’re looking forward to hearing some more of Belinda’s solo material.  We hope to see you there!

* Accompanied by the Los Angeles Philharmonic 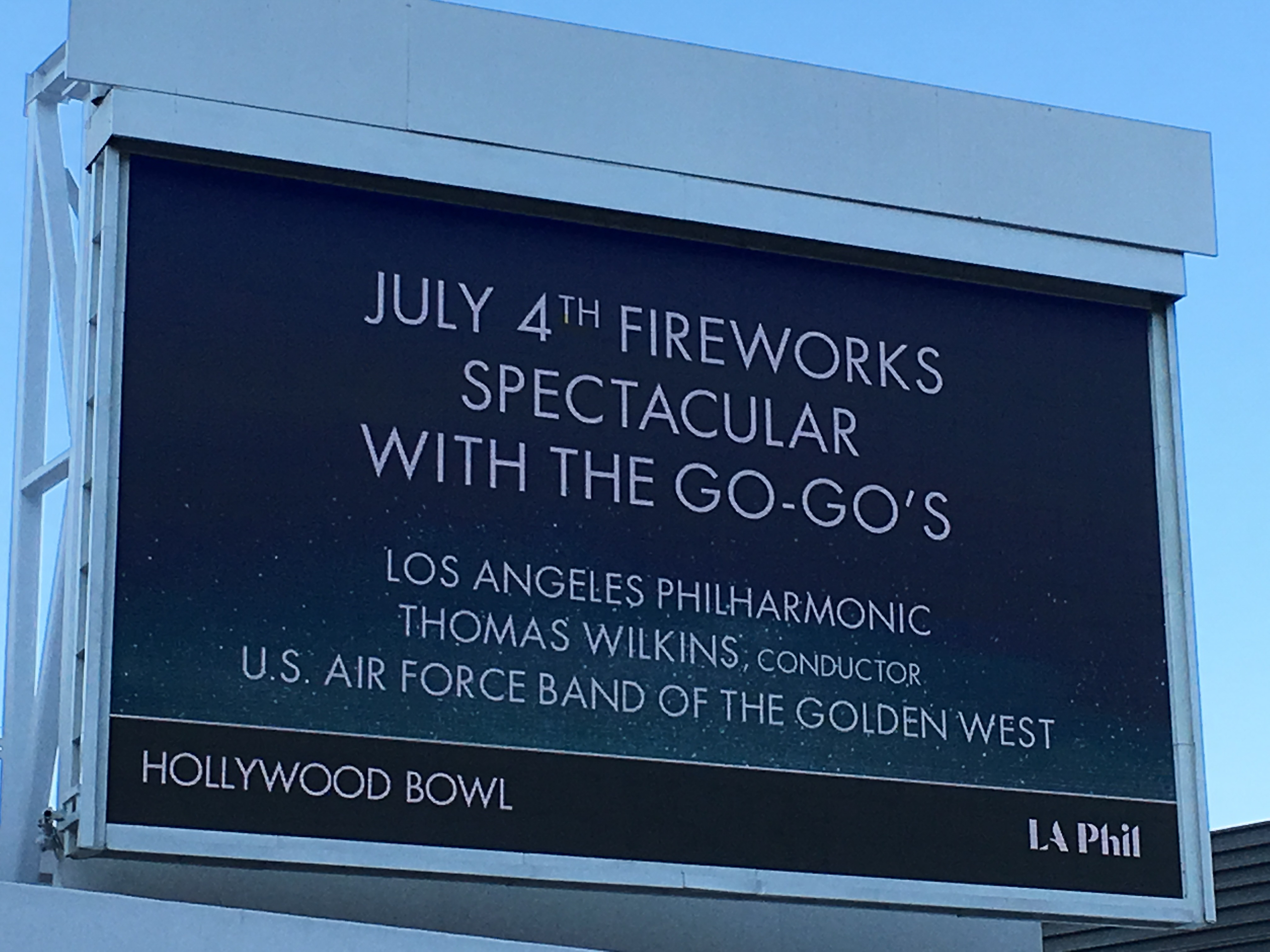 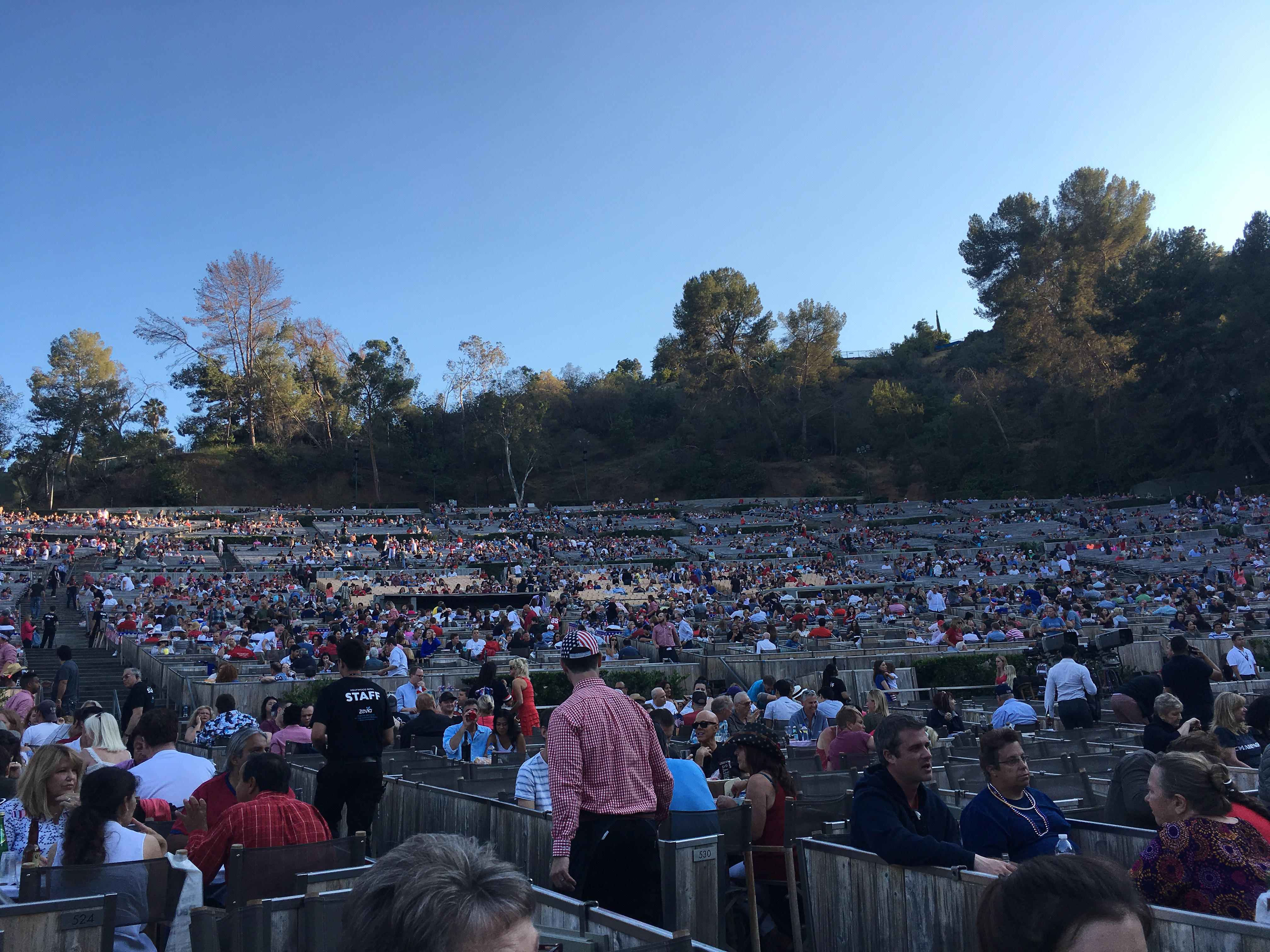 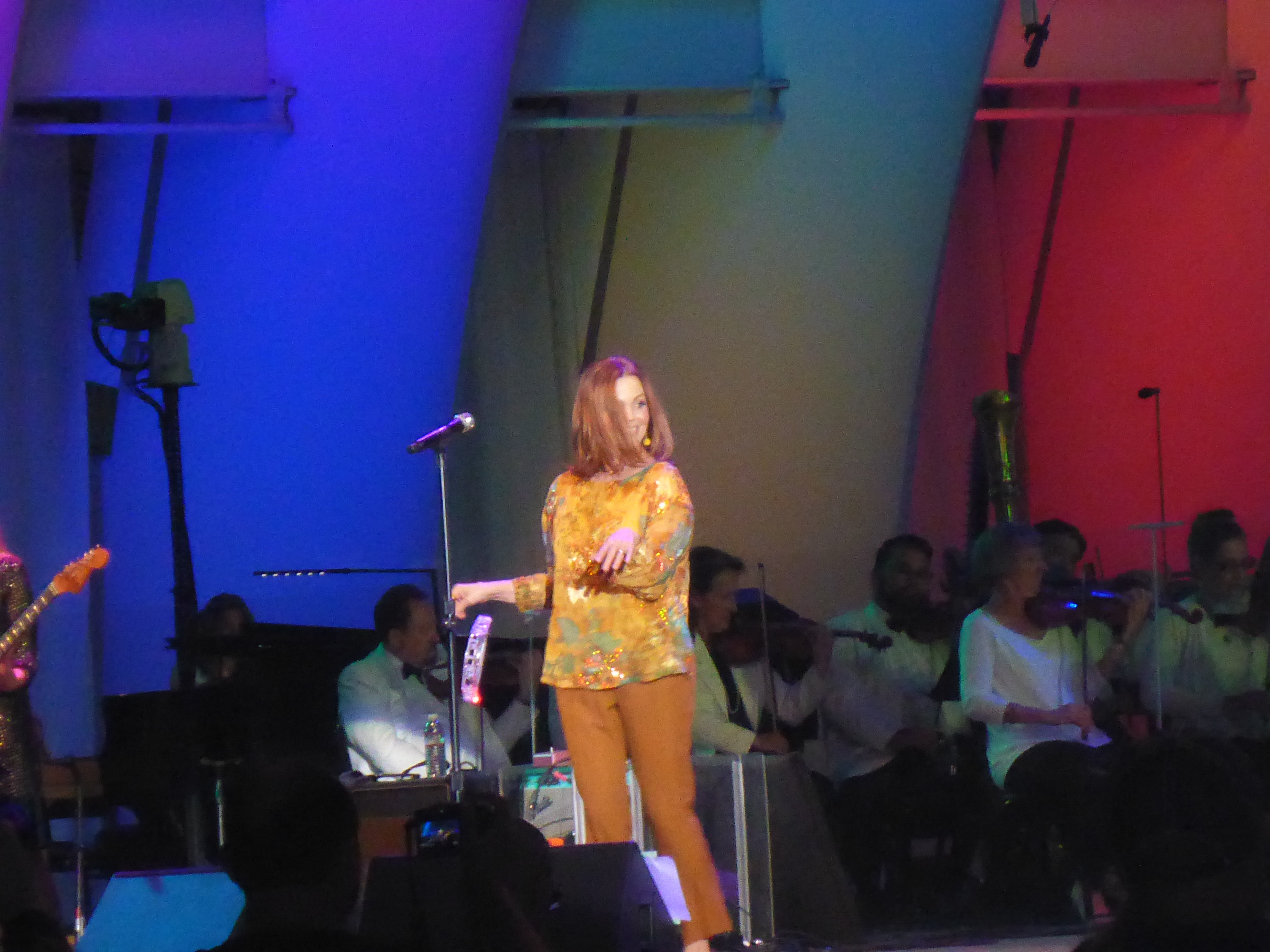 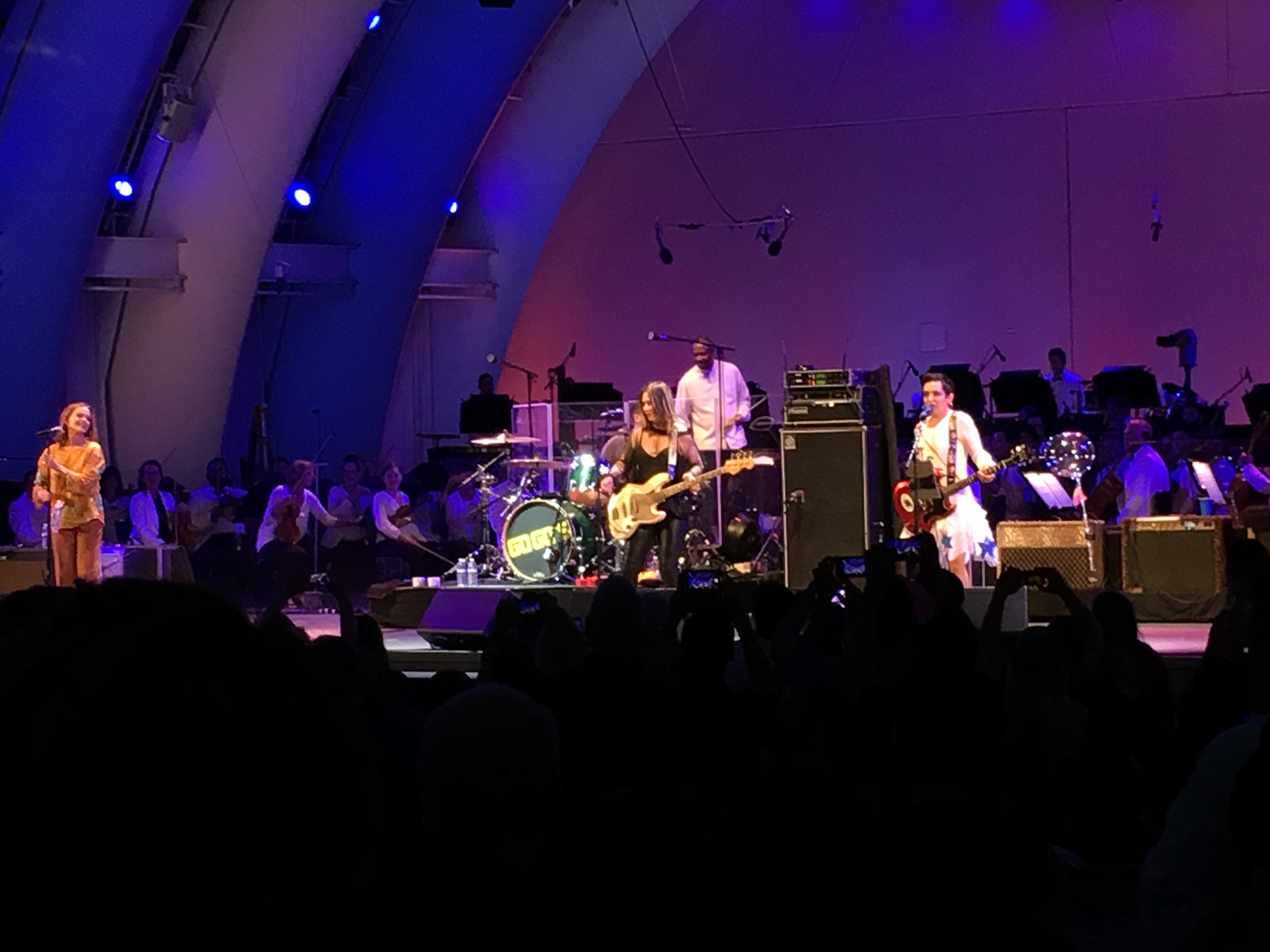 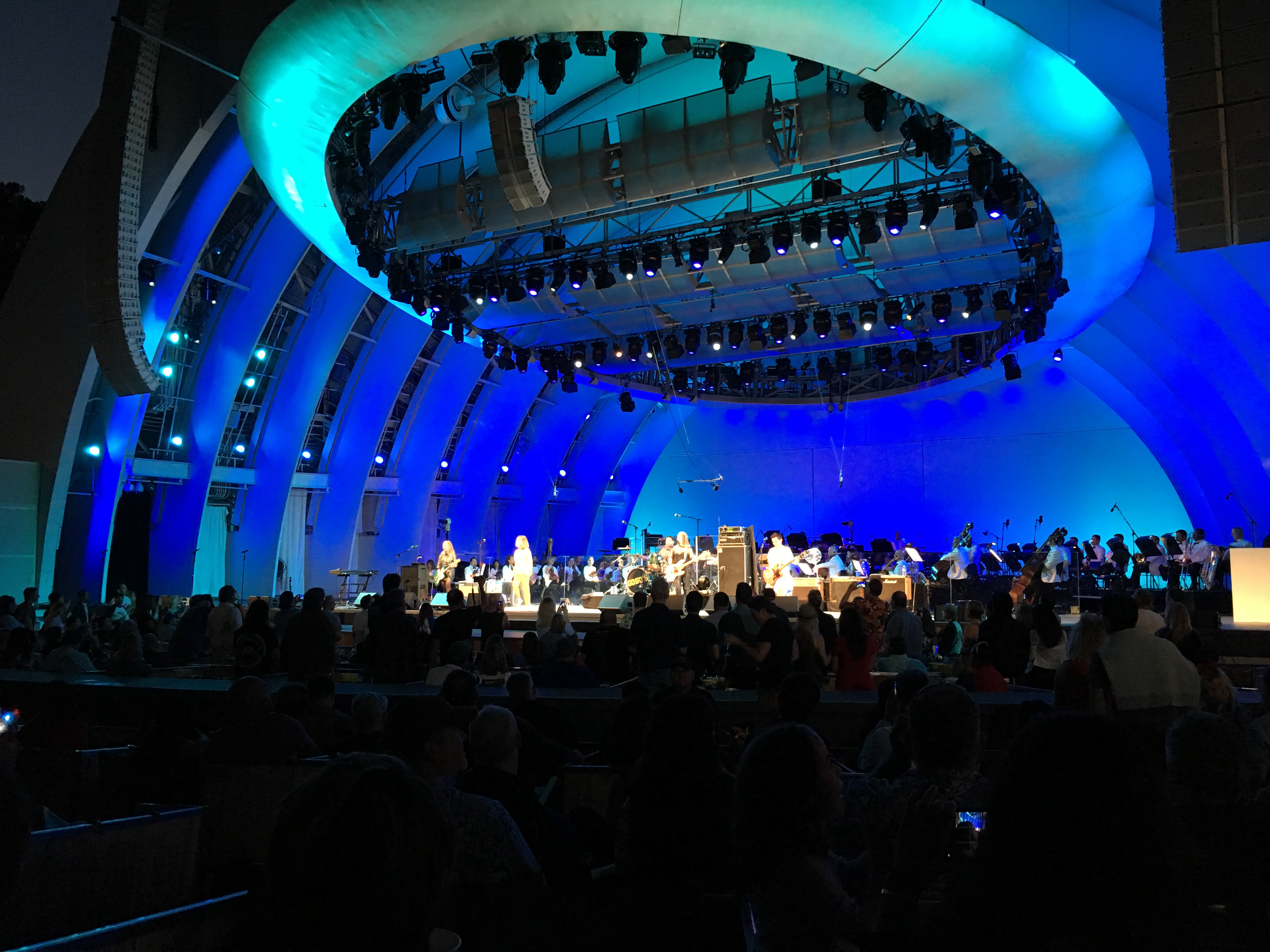 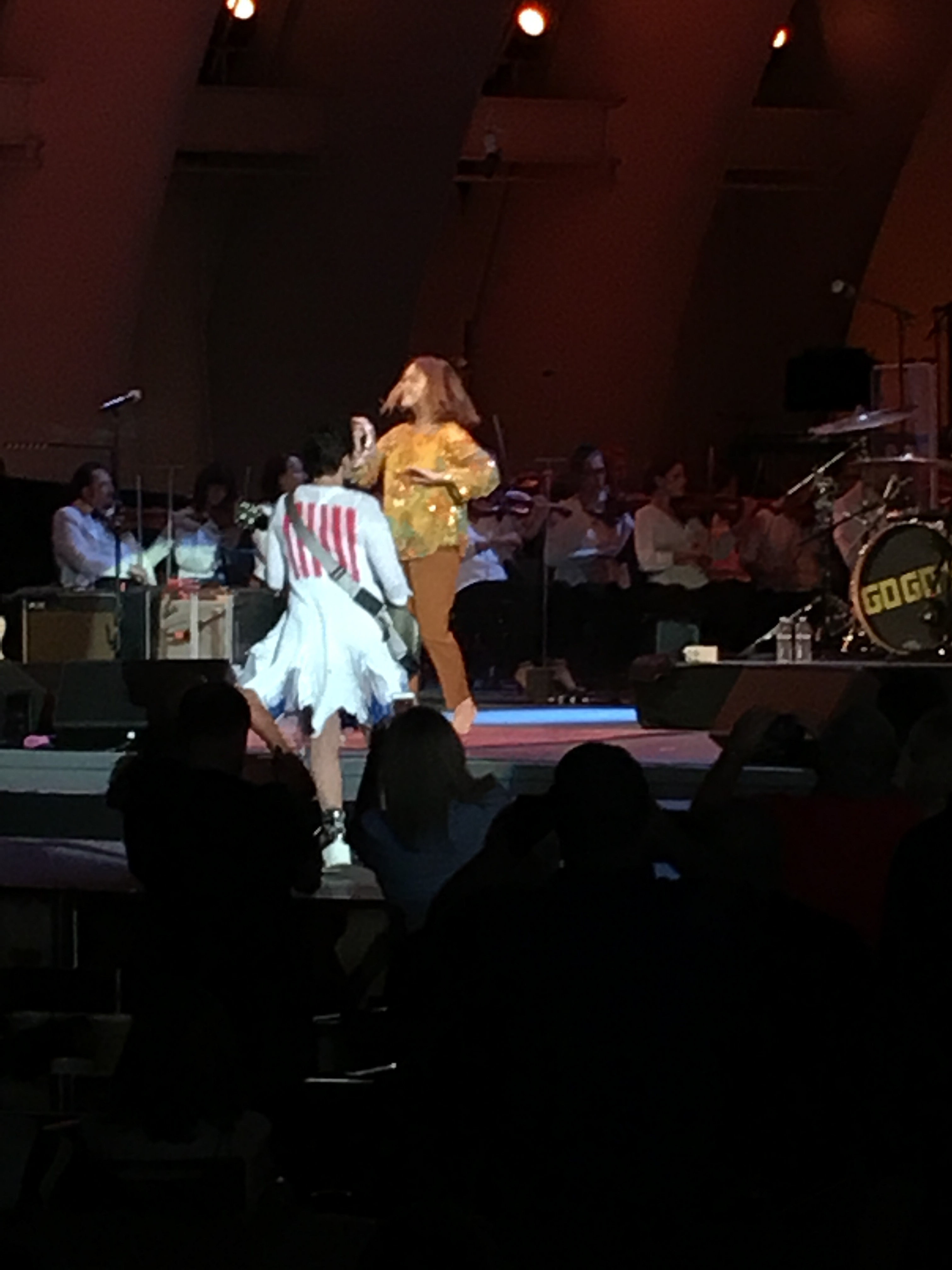 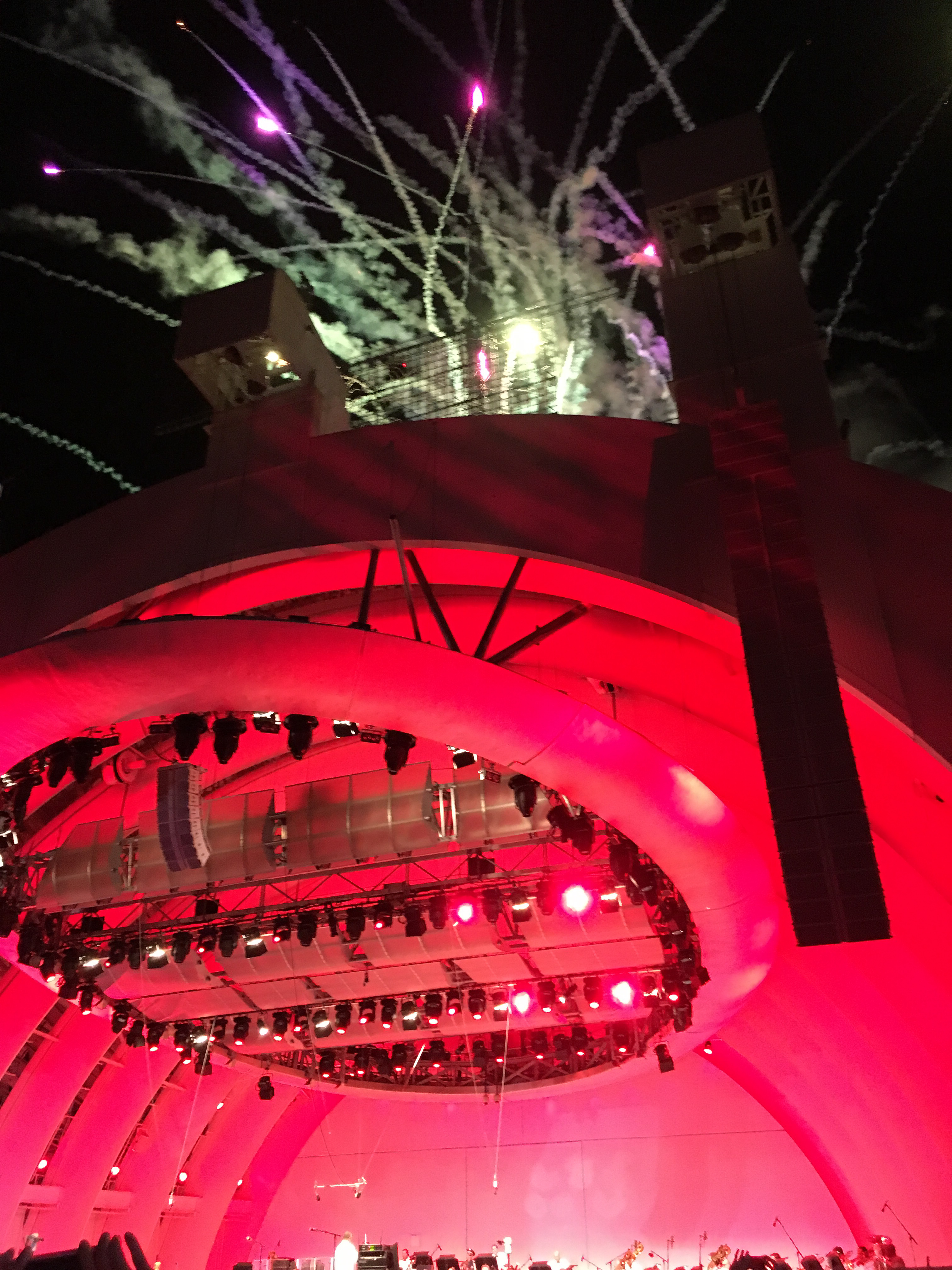 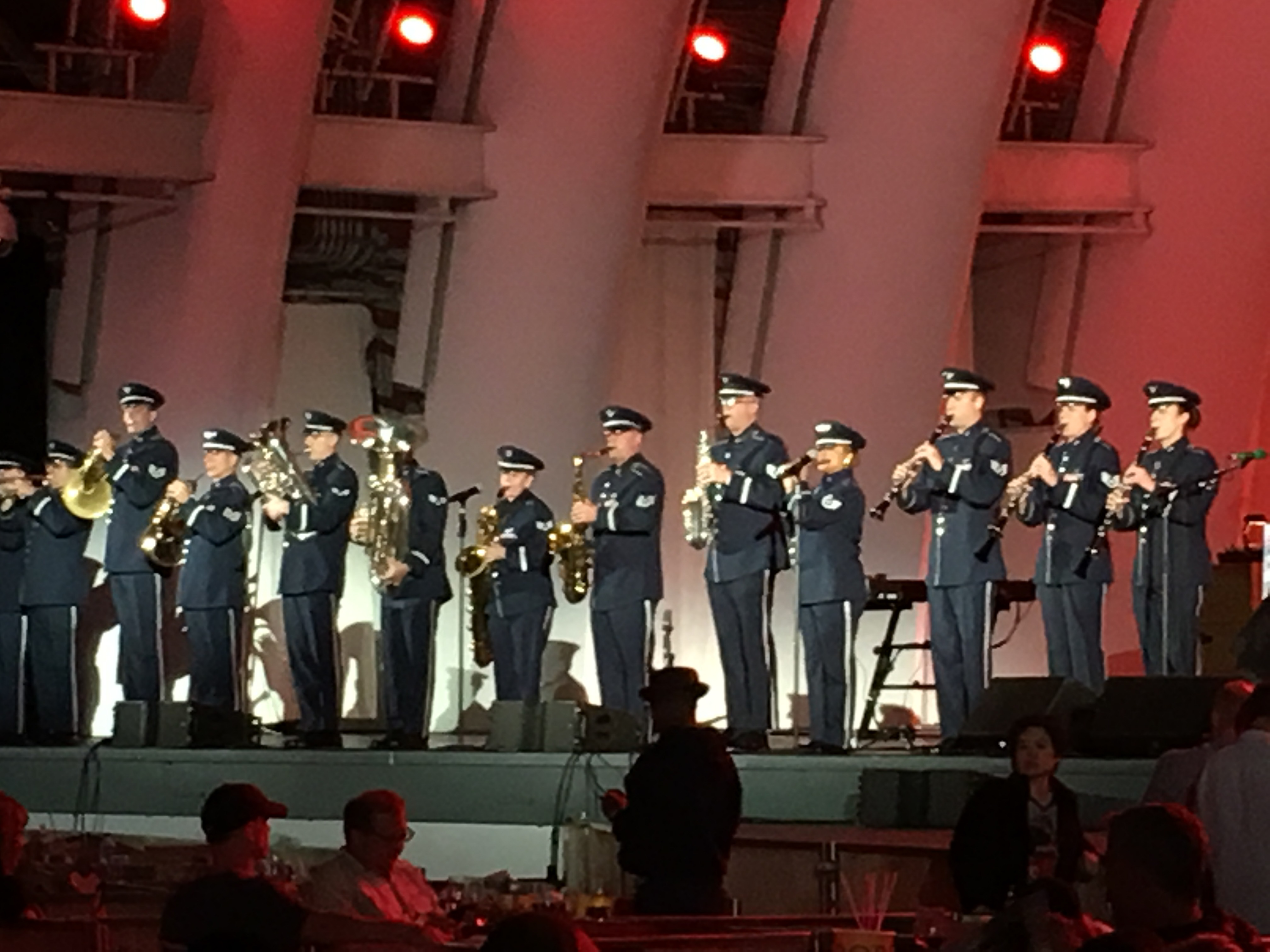 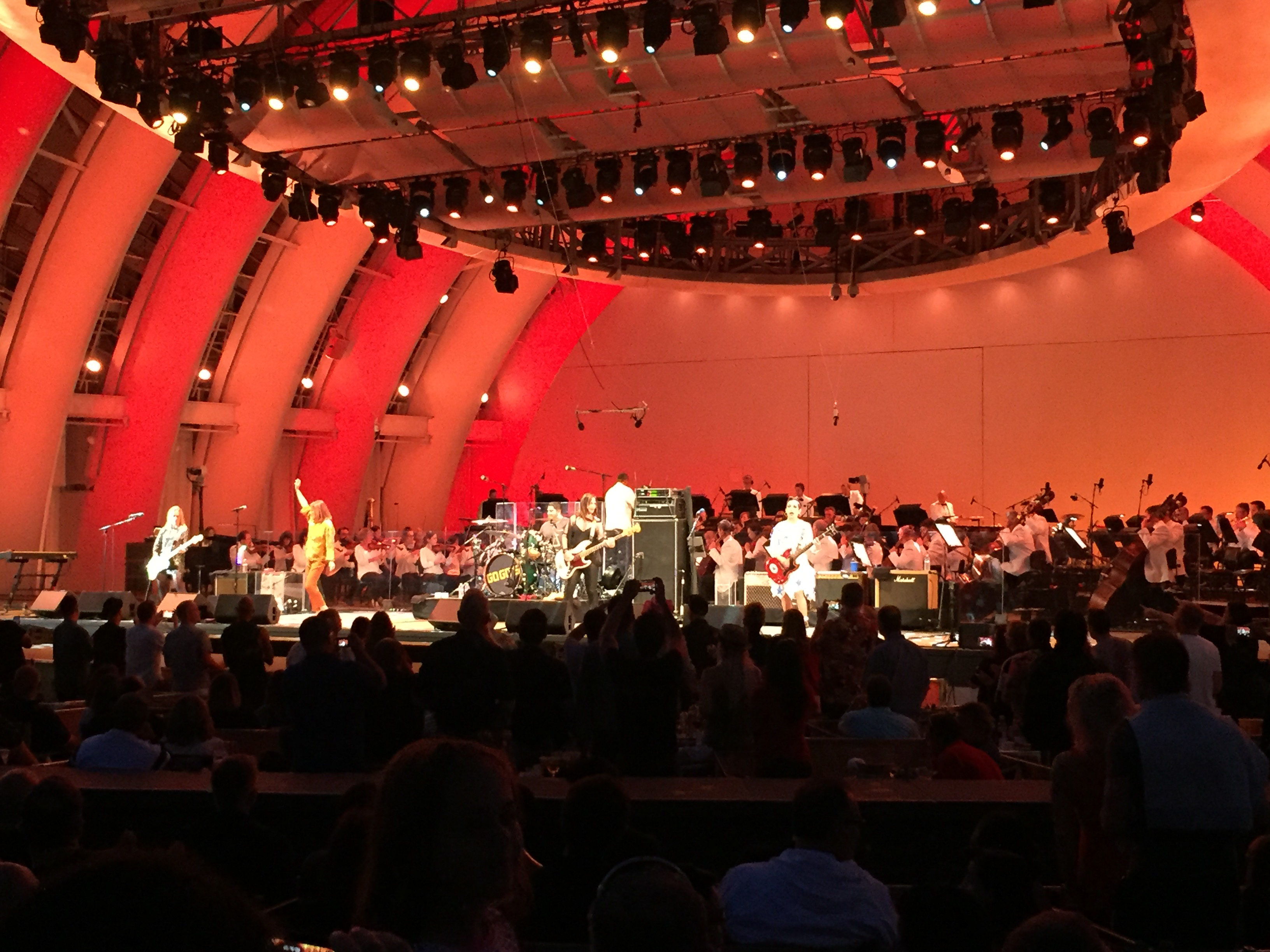 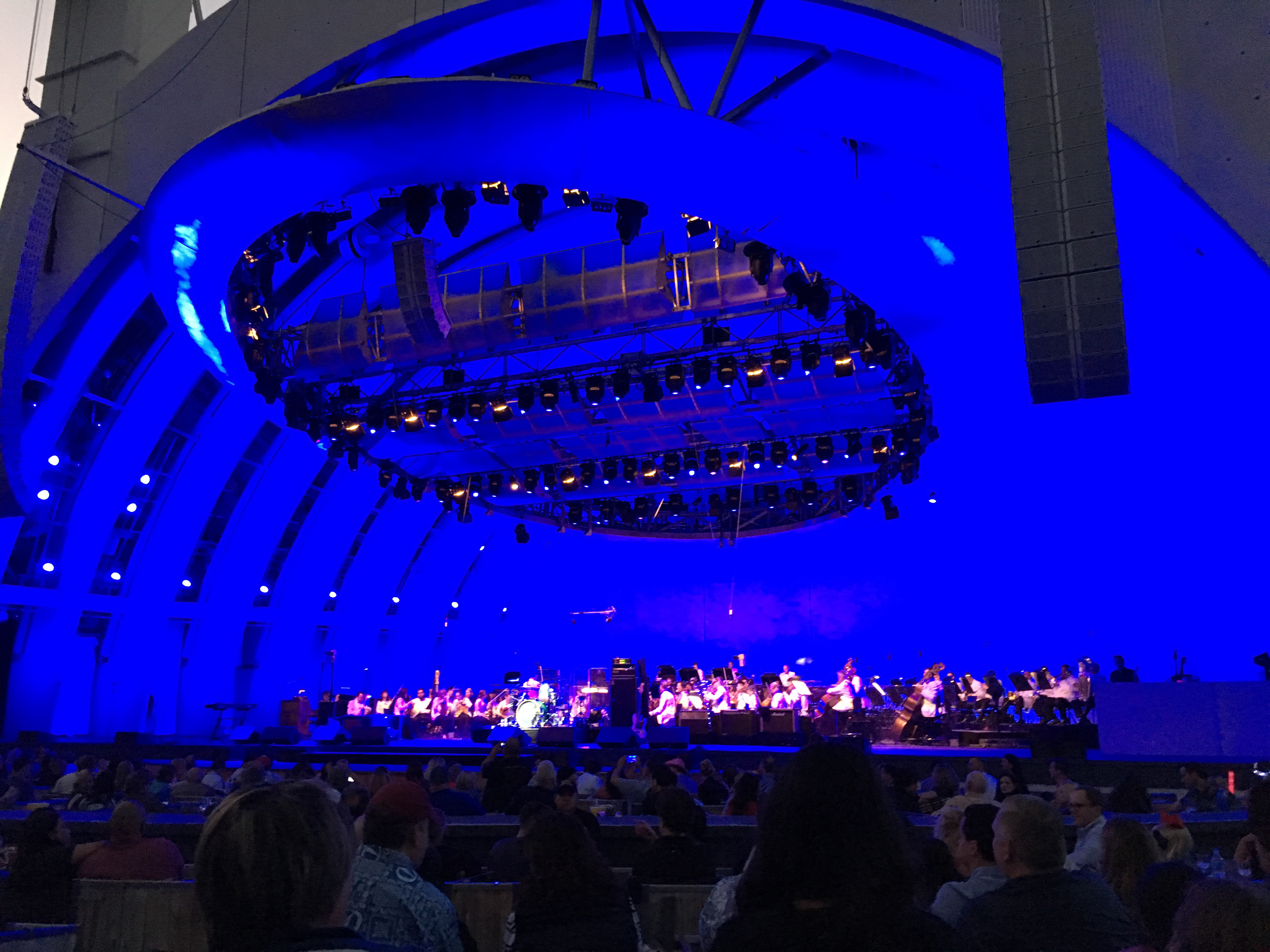 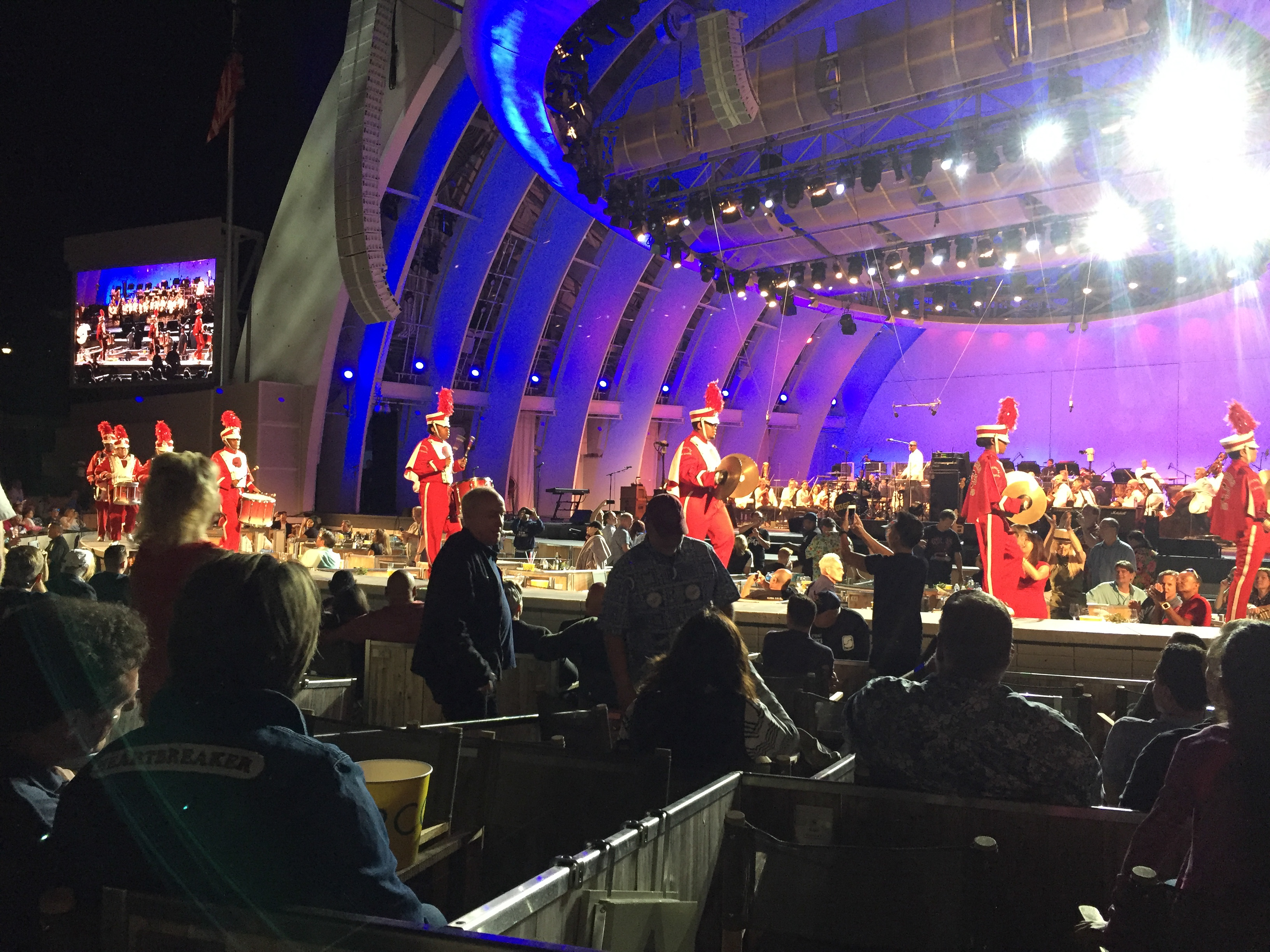