Berlin at Marty’s On Newport

Berlin at Marty’s On Newport

On Friday night, Rock in the OC headed out to Tustin for a stop at Marty’s on Newport to catch Berlin performing a well rounded set of their hits from the 80’s.

Marty’s is a dive bar in the purest sense and a perfect representation of all the pros/cons one would expect. The crowd seemed a pretty good mix of people in their 40’s which is to be expected at a Berlin set. Lots of friendly faces and smiles and only a few scowling frowns and tough guy types. Most of the staff did not look particularly happy to be there, though there were some friendly exceptions.  As this is a bar, the priorities are clearly defined as drinking first, music second.

Berlin was billed to take the stage at 9:00pm. At around 8:30pm we headed over to the “dance floor” in front of the stage for a good spot to watch the show.  There were already about 30-40 people crowded in the first few rows near the stage – so we ended up about 4-5 rows back, depending on the ebb and flow of the crowd.  As the crowd swelled and the heat was rising, 9:00pm came and went. By 9:20pm the DJ was treated to some tongue in cheek shouting and booing. He accounted that Berlin was running late and would be taking the stage at 10:00pm.  As the DJ pumped 80’s hits over the loudspeakers, we started chatting with our new “neighbors”.  We met Jim from Tustin, a cool guy who had been coming to Marty’s before they added the stage.  We were also situated near a true Berlin fan, a guy who had Terri Nunn’s autograph tattooed on his bicep.

By 10:00pm the couple in front of us had creeped beyond the point of consumption that allows most of us to maintain a reasonable level of decorum and were outright shouting at the DJ.  Bolstered with beer muscles the 5’3 “gentleman” threatened to kick the DJ’s ass, which brought a brief moment of levity to those of us in earshot. We were starting to wonder if all this discomfort was going to be worth it – or if the band was even going to show up.

Finally, at around 10:15 they started prepping the stage for the show – placing the set list out and calibrating the microphones.  By the time the show started at 10:40pm most were at about their limit and the grumbling was prevalent.

Even with all that, Berlin was amazing…

Terri did a great job chatting with the crowd in between songs – although at least while we were in earshot she didn’t mention why they started so late.  I mention “while we were in earshot” because after about 4 or 5 songs the heat and the crowd was a bit much, so we stepped outside to the smoking patio for some “fresh air”.  The main entrance has a large “no re-entry” sign – so smoking patio was the only option to get outside.  On the plus side, we could still hear the band (although somewhat muffled) and we chatted with some really cool people who were there to catch the show.

After about a song or two of being outside, somebody opened the door and yelled “there is a fight going on”.  Ugh – not surprising given the heat inside, tight quarters, and extra time to consume alcohol.  When we returned to the dance floor – there was a lake of booze where the fight had taken place.  It remained untouched until after we left at the end of the show – causing patrons to tiptoe around it or risk slipping in the puddle.

On the plus side, we got to stand near the back – on the other side of the puddle – and have a pretty clear view to the stage as nobody was standing in front of us.  There was also a nice ceiling fan to provide a bit of circulation.  Berlin finished up with Dancing In Berlin, Take My Breath Away, and Sex (I’m a…).  After leaving the stage briefly, they returned for an encore of AC/DC’s Highway to Hell – always a crowd-pleaser.

And with that – the show was over in a little over an hour.

Will we be returning to Marty’s?  Maybe.  But it is going to take a really good band to get us to go back.

Will we go to another Berlin show?  Most definitely – especially at a more music friendly venue.  We’re looking at you, Coach House. 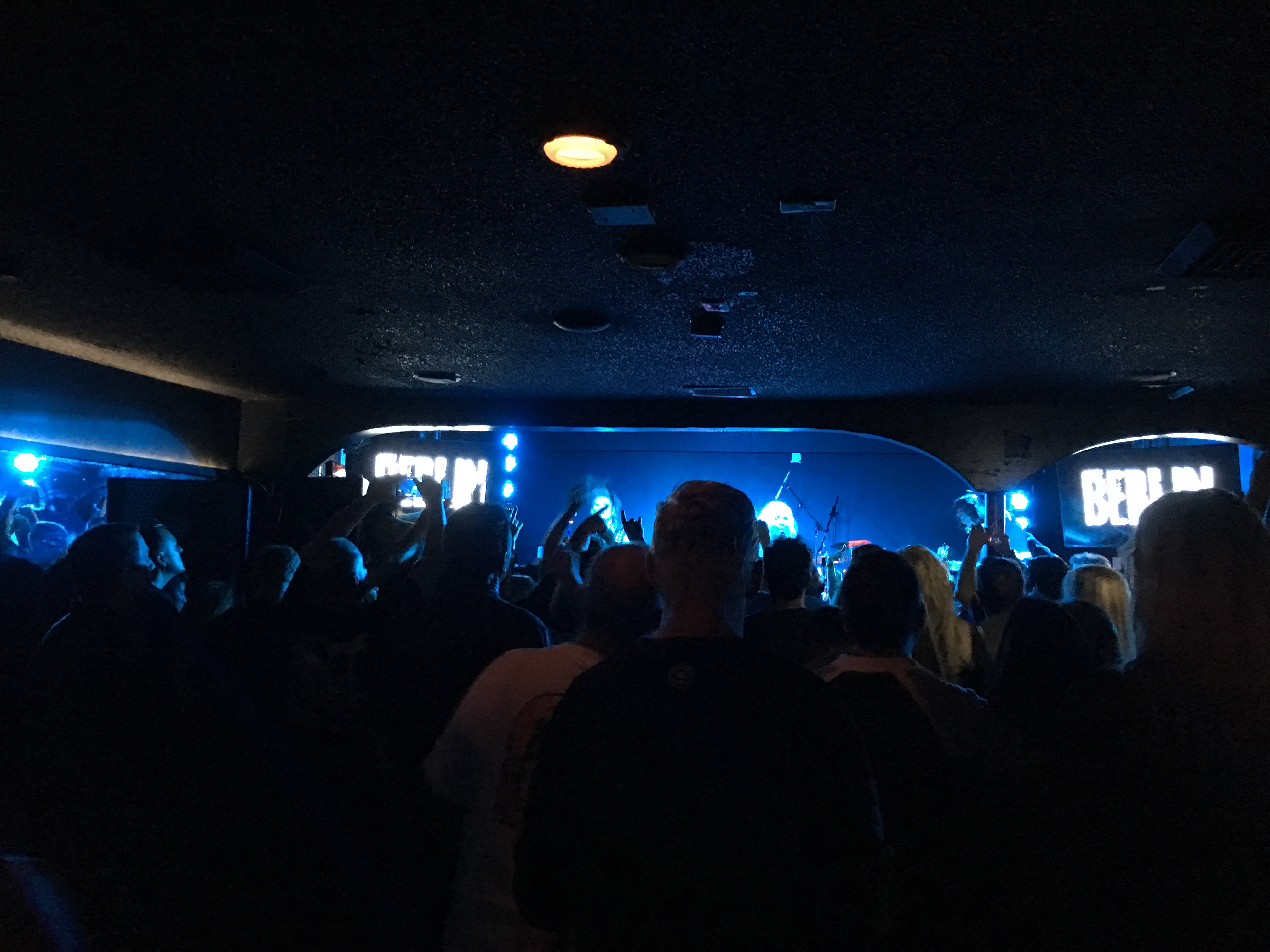